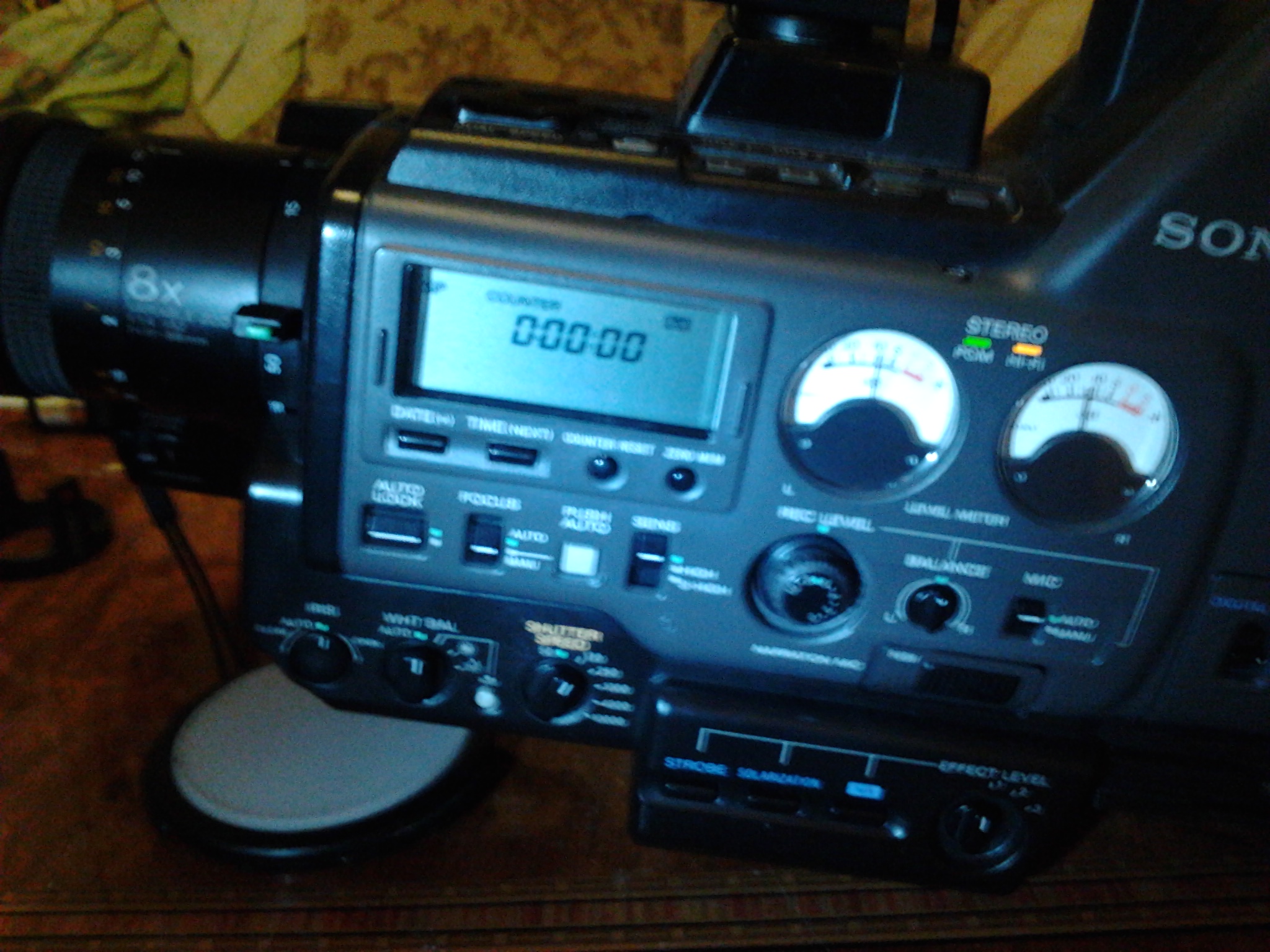 In addition to my Panasonic NV-MS1 with a mechanical defect I also bought myself a Sony CCD-V5000E. All of these models suffer from “bad caps”, a common problem with technics from the 90s. It means: All of the SMD capacitors on the boards inside are broken and have to be replaced. I really did it, I could replace all of them and the device is running again. Before my repair it was possible to turn it on, but it took almost 20 seconds to get an image in the viewfinder. As soon as I pressed the recording button, the picture was garbled.

If you want to repair your own camera I counted all the capacitors for you. In summary, 73 capacitors have to be replaced, starting with the SMD capacitors:

The 33/4V capacitor was nowhere to be found, so I had to buy a 33/25V. When it arrived here I saw that it was really big – too big. I was still able to get it soldered in, but that solution is far from perfect. You can get all the capacitors at Reichelt – even the 0,22µF cap which is only available as a normal capacitor but it fits perfectly because there is a lot of room where it has to be soldered.

Some big capacitors with a “golden” color have to be replaced, too:

Now I started  – of course, I had to open the camera as the first step and count all the caps. I highly recommend getting the service manual of this camera, it is available on owner-manuals.com. I started with the backplate where I found the first leaking capacitors::

After that I continued opening up the camera, I removed the “handle unit” and the side plate. Now you can see why the service manual is important – and the documentation of your progress by taking a lot of pictures. There are so many cables inside the camera that it is a big mess:

After disconnecting all of the connectors you remove 3 big units out of the camera: the one with the lens, the stacked mainboard (which can be opened up like a book later on) and a board that is completely shielded in metal.

Eventually it looks like this – you can see all of the boards at once here – I started with the board that is completely shielded in metal (apparently the memory controller). This is the board containing most of the SMD caps. So I unsoldered the shield, shot lots and lots of pictures and desoldered all the caps:

Even here are a lot of capacitors that died a long time ago. Crapcaps.

There is a lot of residue on the boards after desoldering of the bad caps so I had to clean up the boards before I started replacing the caps, otherwise the replaced ones would’ve been broken again very soon. I used a cleaning substance specifically designed for cleaning electronic boards, here in Germany it is called “Kontaktchemie Leiterplattenreiniger (LR)” and can be ordered at the Conrad store. Most of the messy parts could easily be cleaned with that, but for extremely hard residues I used an old toothbrush.

If the board is shiny again and no brown, smelly substances are left, the new caps can be soldered in. The whole list at the beginning of this post has costed me approximately 15 bucks in total. To solder the new caps I used a standard 15W soldering iron from a normal store. This iron had a bit of a hard time to get some of the old soldering pads accepting solder again but it was a bit too hot when resoldering the new SMD caps. If I will do this again in the future I will use a combination of a little soldering needle and the standard iron or a temperature controlled soldering station to do the job perfectly. The tip of the solder must not be too big, because the SMD caps are only 4 to 5mm thin and the soldering pads even less, appr. 1mm.

Of course this isn’t the only board that has to be recapped. I also repaired:

The mainboard was the most difficult one to resolder, because first of all, the gaps between the caps are way too small on some occasions and second, the soldering pads had been broken off a lot. When desoldering an old cap, one of these pads was just ripped off and other pads where pretty much disintegrated, only very tiny pieces had been left. And one cap was too big. But I could fix these problems with a little copper and adventuring:

My conclusion: This hard work, which took me some weeks (one week ordering the parts and disassembling the thing) has really paid off. The camera is working again without having any problems. And now the people in my movie project can say: “Look, we have one of the last V5000’s on this planet that does still work!” 😉