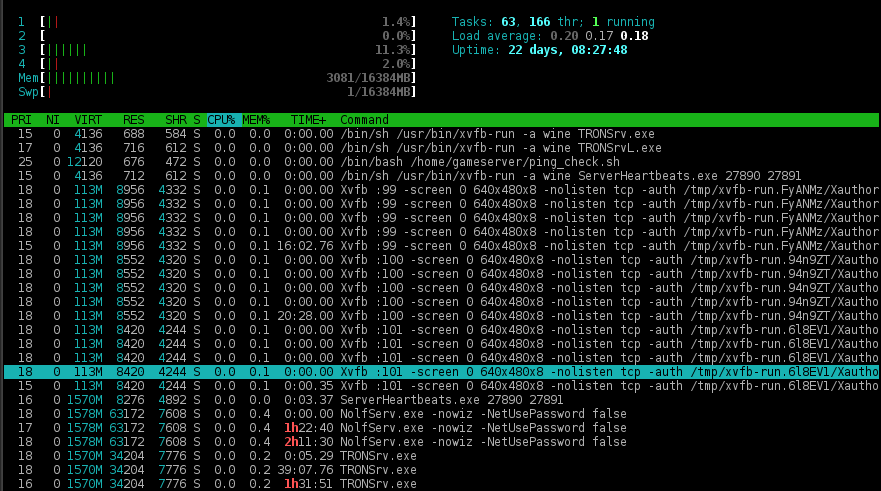 Don’t you hate running an extra computer with Windows on it just to start up the server application of an old game? Or do you want to host a server for a game but there is no Linux binary available? Then you’ve come to the right place. In this blog post I will show you how to host one of my favorite Windows-only games – Tron 2.0 Killer App – on a Linux server that has no graphical environment or X running, with an extra user in its own environment, so it should not be possible to use its security holes for gaining access to your machine. I also added a failsafe script that kicks in and restarts the server if it crashes.

You will have to install Tron, the unofficial patch 1.042 and KillerApp on your Windows machine in order to copy some files from there later on. Lets start:

First, we login to our machine via ssh (as root user) and create a new user called gameserver. This one will be used for running our TRON server:

Now we have a new user without a shell. No one can login to our box with this user. Its home directory is /home/gameserver. Fine. Lets move on, the next step is installing the needed software for running the TRON server:

Wine is needed to emulate a windows environment, xvfb is creating a virtual screen later on, so we can run the server without a screen attached.

and place the following files into it:

Note that there has to be a config inside the ServerData folder. And JUST ONE CONFIG. So you should start up the program at least one time on your windows box and do all the required settings in the multiplayer wizard. After that, you have a preconfigured configfile that you can copy to your linux box.

Second note: Get a msvcirt.dll somewhere on the internet or copy it over from your Windows box into the tron-folder. Wine needs this file to start up the server.

This is it – the TRON server files are on your box and your user is created. But in order to start up properly it still needs some registry entries in your fake windows environment. Otherwise the TRONSrv.exe fails with a “Could not load resource file” error.

into your terminal. The program will create a /home/gameserver/.wine folder for our settings. In that folder, our registry settings are stored.

to return to your previous user.

Now type the following into your terminal

An editor should open up. If not, install the program mc with apt-get install mc.

Directly after the line

Don’t forget to enter a correct cdkey. I will not give you mine

Since you chose to start TRONSrv from the Z: drive you will still have to tell wine which folder to use as the Z: drive. In our case, this is /home/gameserver.
To do so, create a symlink with the following commands:

Now we set up a script that starts your tron server.

Create a new crontab for the gameserver user with the following command:

Paste the following content into the editor and press F2+F10 to save and close it:

What this does: It starts the script tron_check.sh every 60 seconds – so we gonna have to create that and fill it with contents:

The editor opens again. This time, paste the following commands into it. Close with F2+F10.

Now we will make sure, that the whole directory belongs to the right user and that the script is executable:

You can check my server status here, it is running very stable via wine:

Running a second server is also possible, but a bit more complicated. I will not cover that here, however I am here if anyone needs assistance.

I know that some of these steps are very specific to the game I am running but it may help some of you out there to get your servers running on Linux.

Note: If you want to access the graphical interface directly, type in

You will see the virtual screen your server is running on. Its a number like :1, :2 or :99. Just remember this number and start up a VNC server with this command:

Now you can connect to your server with any VNC viewer on Windows or Linux and administrate your server with your mouse. Doesn’t look pretty, but it works – at least for the game “No One Lives Forever”, where I need this: 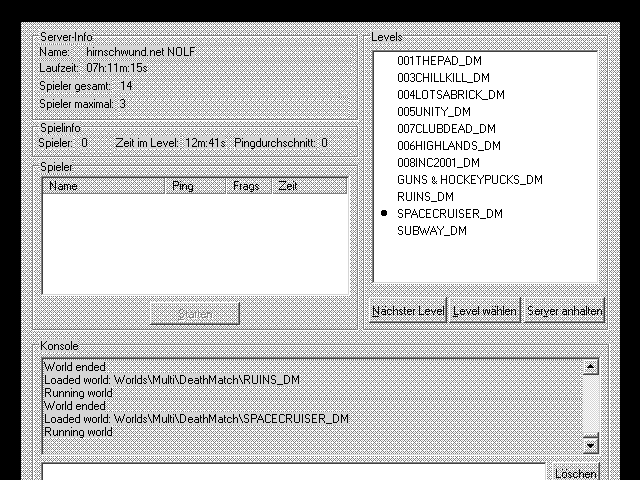 If you don’t want anyone be able to connect to your interface, password protect x11vnc. It prints out instructions on how to do that when you start it up.